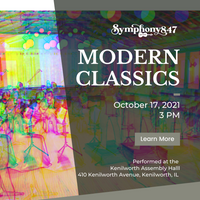 Symphony847 opens our first full season with another important first, Haydn’s first symphony. Considered the father of the symphony, Haydn not only inspired his fellow classicists, but modern composers as well. Igor Stravinsky spent much of his life writing in a “Neo-Classical” style which combined modern tonality with classical structure. The Septet demonstrates some of the same classical structures and rhythmic figures, along with characteristics of the baroque and modern era. Rhythmic drive is a hallmark of Chicago-based Amos Gillespie’s music. These Questions Three features driving keyboard and percussion, but with Jazz-inspired rhythmic figures. The concert will conclude with a lengthy work from the later classical period, the Nonet by Louis Sophr.