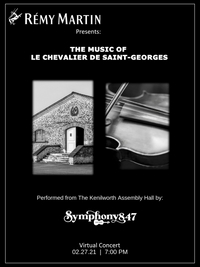 Recorded at the Kenilworth Assembly Hall on February 13, 2021 as part of the RÉMY MARTIN Team Up for Excellence initiative. Once purchased, you will receive a link to the concert stream via email that will be available until May 31, 2021.

FRANZ JOSEPH HAYDN Symphony No. 82 in C major, “The Bear”

Chris Ramaekers conducts Symphony847 in a program that features the two symphonies composed by le Chevalier de Saint-Georges. The concert also features Haydn’s Symphony No. 82 in C major, known as “The Bear”. One of six Paris symphonies by the composer, “The Bear” was commissioned by the Concert de la Loge Olympique, and was first performed in 1787 under the direction of le Chevalier de Saint-Georges.